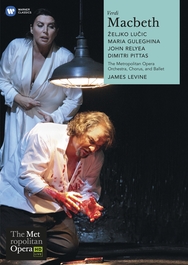 Otello, Deutsche Oper Berlin
'The production's true star, however, was Serbian baritone Zeljko Lucic as a sinewy, bone-chilling Iago. With his crepuscular tones and haunting phrasing, Lucic's Iago was evil incarnate. In this production, Iago amused himself by tossing coins to beggar children, merely to watch them scramble on the floor. Lucic also cooed his most sinister aria, ‘Credo in un Dio crudel,' into the ears of a little girl. There are certainly more booming, more forceful Iagos out there, but Lucic's deliberate performance was shrouded in coiling, unrelenting dread.'
— Opera News
La Traviata at the MET
'Germont was Zeljko Lucic, who sang Macbeth last season: a real Verdi baritone, with a smooth, mellow sound as large as you could desire, and an actor's judgment of the effect of each word. Most Germonts either stand stiffly or become excessively, even tearfully, sympathetic to the lady with a past whom they encounter in Act II; Lucic's body language showed a provincial's discomfort in this sophisticated milieu, and he had the grace to seem downright embarrassed at the sordid sacrifice he requested of her. A bit of a sob frilled each line of the second verse of 'Di Provenza,' and I thought for a moment they might not cut his cabaletta. Cut it they did; the number is a pointless convenienze, but for once I wanted to keep it in, just to continue reveling in his sound.'
— John Yohalem, Opera Today

Photo Journal: Racy and Innovative Macbeth Makes Waves at Bavarian State Opera
'The central Lord and Lady are portrayed by Serbian baritone Zeljko Lucic and German soprano Nadja Michael. Lucic - who has previously performed the role at the Metropolitan Opera and may be seen on the subsequent DVD release - earned postive reviews as a 'bold, savage Macbeth who sings with solidity and detail.' Read More...
— Matt Blank, Playbill

Macbeth: Live from New York to a cinema near you
'The Barbican is one of several participating British institutions, and the first of a series of six shows this winter drew a sizeable crowd of 400. The opera was Verdi's Macbeth, directed by Adrian Noble in a lively staging which updated the scenario to the 1950s. Levine conducted his orchestra magnificently, with Zeljko Lucic giving a forthright reading of the title role and Maria Guleghina barnstorming her way through Lady Macbeth.' Read More...
— Rupert Christiansen, Daily Telegraph (London)

Verdi's 'Macbeth' at Metropolitan Opera
'In the Serbian baritone Zeljko Lucic, it has a Macbeth of the highest caliber, vocally and dramatically. Lucic sang with unfailing beauty at all levels of dynamics, from a tortured whisper to a confident, embracing full voice, his sound sometimes seeming to issue from a twilight world of anguish. The evening's highlight came in the last scene, when Lucic's Macbeth, broken and bewildered, poured out 'Piet ... , rispetto, amore' with a buttery legato and soft-grained but potent, soulful tone.'
— Marion Lignana Rosenberg, New York Newsday

The Scottish Opera: The Thane, His Lady, That Spot
'As Macbeth, the baritone Zeljko Lucic, little known to Met audiences, gave an honorable and affecting performance of an intimidating role.'
— Anthony Tommasini, New York Times

'He [Lucic] has the vocal heft of a true Verdi baritone and his portrayal of Macbeth as a man driven by demons beyond his control is persuasive.'
— Mike Silverman, Associated Press