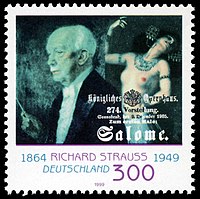 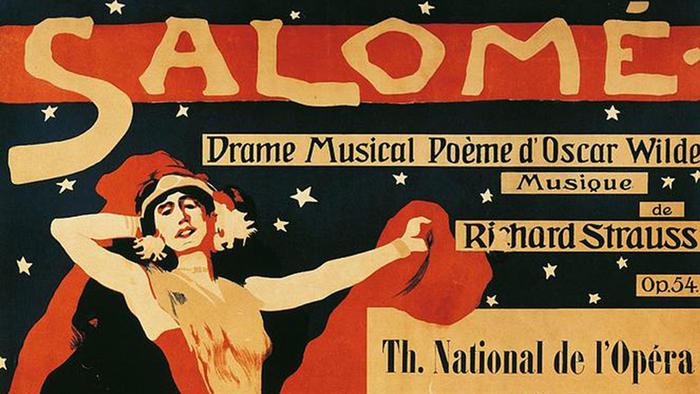 In Richard Strauss: Life his first operatic success with Salome, based on Oscar Wilde’s play. Although Salome was regarded by some as blasphemous and obscene, it triumphed in all the major opera houses except Vienna, where the censor forbade Gustav Mahler to stage it.

“Ah! Thou wouldst not suffer me to kiss thy mouth, Jokanaan!” With these words, one of the most decadent scenes ever devised for the stage begins. We see the teen-age Biblical princess Salome holding a silver platter on which rests the bloody, decapitated head of Jokanaan (John the Baptist). “Well, I will kiss it now! I will bite it with my teeth as one bites a ripe fruit,” she says, voraciously anticipating a moment she has waited for over the course of Strauss’ opera.

Richard Strauss (1864-1949) first saw Oscar Wilde’s Salomé in a German translation in Berlin in November 1902. He adapted his own libretto from that translation, and the opera that resulted scandalized Europe and America. The first Salome, Marie Wittich, refused to perform the “Dance of the Seven Veils,” declaring that no respectable woman would strip on stage; J.P. Morgan’s daughter led a crusade against the work in New York, which meant that all further performances were cancelled after the Metropolitan Opera unveiled the work in 1907; and Kaiser Wilhelm II of Germany worried that Salome would do Strauss’ career a lot of damage. “The damage,” the composer remarked later, “enabled me to build my villa at Garmisch.”

In Salome, we find Strauss revisiting the precedent established by Wagner in works like Tristan und Isolde and Götterdämmerung of including a monumental final scene for soprano. The tone of Salome’s finale is quite different, though. Our heroine is transfigured, to be sure, but into a demented, depraved necrophiliac. Love and death recur here, but Isolde’s transcendent vision is replaced here with Salome’s horrific nightmare.

She has been fascinated with John the Baptist since the opera began, with his white body, his black hair, and his red lips. She dances the “Dance of the Seven Veils” for her lust-filled stepfather when he promises to give her anything she wants in return. This is how she gets John the Baptist’s head on a platter. As she caresses it, contemplates it, and finally kisses it, we hear various themes from earlier in the opera recalled, including music from the “Dance of the Seven Veils.” As she kisses the mouth, clouds cover the moon and we hear an eerie theme in the oboes over a trill in the flutes. Overwhelmed with disgust and revulsion, her stepfather orders his guards to kill her, and they crush her beneath their shields.

- John Mangum is a Ph.D. candidate in history at UCLA. He has also written for the Hollywood Bowl, Los Angeles Opera, and the Hong Kong Arts Festival.

Learn about this topic in these articles: