PDFMiner has evolved into a terrific tool. It allows direct control of pdf files at the lowest level, allowng for direct control of the creation of documents and extraction of data. Combined with document writer, recognition, and image manipulation tools as well as a little math magic and the power of commercial tools can be had for all but the most complex tasks. I plan on writing on the use of OCR, Harris corner detection, and contour analysis in OpenCV, homebrew code, and tesseract later.

However, there is little in the way of documentation beyond basic extraction and no python package listing. Basically the methods are discoverable but not listed in full. In fact, existing documentation consists mainly of examples despite the mainy different modules and classes designed to complete a multitude of tasks. The aim of this article, one in a hopefully two part series is to help with extraction of information. The next step is the creation of a pdf document using a tool such as pisa or reportlab since PdfMiner performs extraction.

Pdfminer: a pure Python PDF tool specialized on text extraction tasks All tools have been used with their most basic, fanciless functionality – no layout re-arrangements, etc. For demonstration purposes, we have included a version of GetText(doc, output = “json”), that also re-arranges the output according to occurrence on the page. PDFMiner is a text extraction tool for PDF documents. Warning: As of 2020, PDFMiner is not actively maintained. The code still works, but this project is largely dormant. For the active project, check out its fork pdfminer.six. © 2021 Anaconda, Inc. All Rights Reserved. (v2.35.5 79f2b068) Legal Privacy Policy Legal Privacy Policy.

The Imports
There are several imports that will nearly alwasy be used for document extraction. All are under the main pdfminer import. The imports can get quite large.

Imports for Extraction
The following table goes over the imports that perform actions on the document.

Imports that act as Types
Other imports act as a means of checking against types and utilizing the other classes properties. The PDFDocument contains a variety of pdf objects that which hold their own information. That information includes the type, the coordinates, and the text displayed in the document. Images are also handleable.

These types are useful for pulling information from tables as eplained by Julian Todd.

Creating the Document
Creating the document requires instantiating each of the parts present in the diagram above. The order for setting up the document is to create a parser and then the document with the parser. The resourcemanager and LAParams accepted as arguments by the PageAggregator device used for this task. The PageInterpretor accepts the aggregator and the resource manager. This code is typical of all parsers and as part of the pdf writers.

The get_result() method adds to the StringIO. The results are passed ot the ParsePage definition. Another method can be used for pure extraction (.get_value()).

The PDF Text Based Objects
The layout received from get_result() parses the strings into separate objects. These objects have several key components. They are the type, the coordinates (startingx, startingy, endingx, endingy), and the content.

Accessing the type can be found using type(object) and compared to the direct type (e.g. type(object)LTRect). In this instance, a comparison to LTRect returns True.

Getting the Output
Output is obtained and parsed through a series of method calls. The following example shows how to extract content.

This code takes the object stack as a list, which contains the method pop since python, although having a collections (import collections) package with data structurs such as a set, is highly flexible.

This example is a modification of Julian Todd’s code since I could not find solid documentation for pdfminer. It takes the objects from the layout, reverses them since they are placed in the layout as if it were a stack, and then iterates down the stack, finding anything with text and expanding it or taking text lines and adding them to the list that stores them.

The resulting list (tcols), looks much like other pure extractions that can be performed in a variety of tools including Javas pdfbox, pypdf, and even pdfminer. However, the objects are placed into the bbox (bounding box coordinate list) and the text object accessible from .get_text().

Images are handled using the LTImage type which has a few additional attributes in addition to coordinates and data. The image contains bits, colorspace, height,imagemask,name,srcsize,stream, and width.

Extracting an image works as follows:

PDFMiner only seems to extract jpeg objects. However, xpdf extracts all image.

A more automated and open source solution would be to use subprocess.Popen() to call a java program that extracts images to a specific or provided folder using code such as this (read the full article).

Handling the Output
Handling the code is fairly simple and forms the crux of this articles benefits besides combining a variety of resources in a single place.

Just iterate down the stack and pull out the objects as needed. It is possible to form the entire structure using the coordinates. The bounding box method allows for objects to be input in a new data structure as they appear in any pdf document. With some analysis, generic algorithms are posslbe. It may be a good idea to write some code first with the lack of documentation.

This code uses python's list comprehension. The reason for the inequalities is that slight differentiations exist in the placement of object. The newline escape character represents an underline in this case.

In order to see how to perform pure text extraction and move to a better understanding of the code, analyze the following code.

Conclusion
PdfMiner is a useful tool that can write and read pdfs and their actual formating. The tool is flexible and can easily control strings. Extracting data is made much easier compared to some full text analysis which can produced garbled and misplaced lines. Not all pdfs are made equal.

PDFMiner is a tool for extracting information from PDF documents. Unlikeother PDF-related tools, it focuses entirely on getting and analyzingtext data. PDFMiner allows one to obtain the exact location of text in apage, as well as other information such as fonts or lines. It includes aPDF converter that can transform PDF files into other text formats (suchas HTML). It has an extensible PDF parser that can be used for otherpurposes than text analysis.

In order to process CJK languages, you need an additional step to takeduring installation:

On Windows machines which don’t have make command, paste thefollowing commands on a command line prompt:

pdf2txt.py extracts text contents from a PDF file. It extracts allthe text that are to be rendered programmatically, i.e. text representedas ASCII or Unicode strings. It cannot recognize text drawn as imagesthat would require optical character recognition. It also extracts thecorresponding locations, font names, font sizes, writing direction(horizontal or vertical) for each text portion. You need to provide apassword for protected PDF documents when its access is restricted. Youcannot extract any text from a PDF document which does not haveextraction permission.

Note: Not all characters in a PDF can be safely converted toUnicode.

Specifies the output file name. By default, it prints the extractedcontents to stdout in text format.

Specifies the comma-separated list of the page numbers to be extracted.Page numbers start at one. By default, it extracts text from all thepages.

Specifies the output format. The following formats are currentlysupported.

Specifies the output directory for image extraction. Currently only JPEGimages are supported.

These are the parameters used for layout analysis. In an actual PDFfile, text portions might be split into several chunks in the middle ofits running, depending on the authoring software. Therefore, textextraction needs to splice text chunks. In the figure below, two textchunks whose distance is closer than the char_margin (shown as M)is considered continuous and get grouped into one. Also, two lines whosedistance is closer than the line_margin (L) is grouped as a textbox, which is a rectangular area that contains a “cluster” of textportions. Furthermore, it may be required to insert blank characters(spaces) as necessary if the distance between two words is greater thanthe word_margin (W), as a blank between words might not berepresented as a space, but indicated by the positioning of each word.

Each value is specified not as an actual length, but as a proportion ofthe length to the size of each character in question. The default valuesare M = 2.0, L = 0.5, and W = 0.1, respectively.

Suppress object caching. This will reduce the memory consumption butalso slows down the process.

Forces to perform layout analysis for all the text strings, includingtext contained in figures.

Specifies how the page layout should be preserved. (Currently onlyapplies to HTML format.)

Specifies the output scale. Can be used in HTML format only.

Specifies the maximum number of pages to extract. By default, itextracts all the pages in a document. 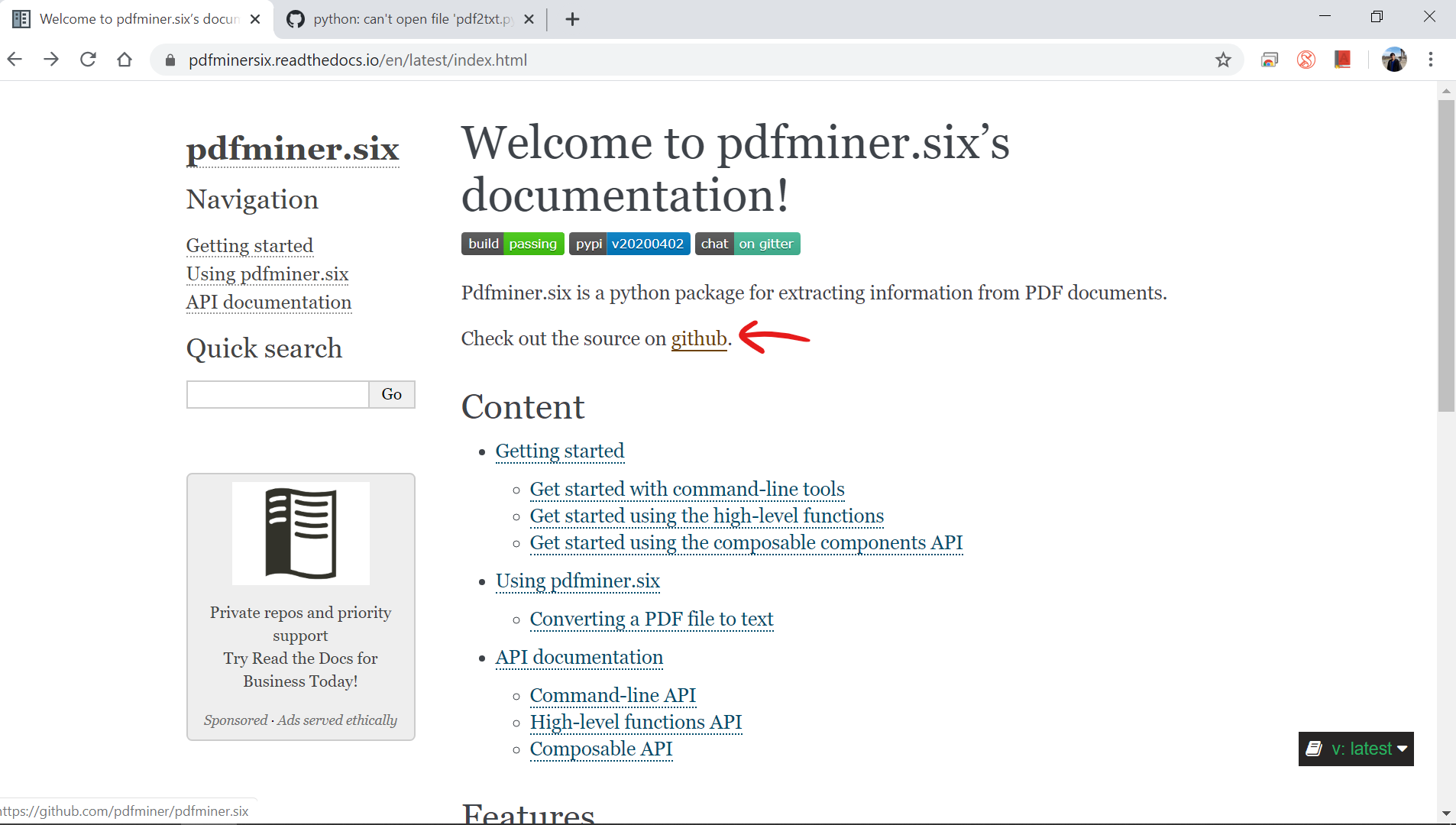 dumppdf.py dumps the internal contents of a PDF file in pseudo-XMLformat. This program is primarily for debugging purposes, but it’s alsopossible to extract some meaningful contents (such as images).

Instructs to dump all the objects. By default, it only prints thedocument trailer (like a header).

Specifies the output format of stream contents. Because the contents ofstream objects can be very large, they are omitted when none of theoptions above is specified.

Extracts embedded files from the pdf into the given directory.

(This is so-called MIT/X License)

Permission is hereby granted, free of charge, to any person obtaining acopy of this software and associated documentation files (the“Software”), to deal in the Software without restriction, includingwithout limitation the rights to use, copy, modify, merge, publish,distribute, sublicense, and/or sell copies of the Software, and topermit persons to whom the Software is furnished to do so, subject tothe following conditions:

The above copyright notice and this permission notice shall be includedin all copies or substantial portions of the Software.

THE SOFTWARE IS PROVIDED “AS IS”, WITHOUT WARRANTY OF ANY KIND, EXPRESSOR IMPLIED, INCLUDING BUT NOT LIMITED TO THE WARRANTIES OFMERCHANTABILITY, FITNESS FOR A PARTICULAR PURPOSE AND NONINFRINGEMENT.IN NO EVENT SHALL THE AUTHORS OR COPYRIGHT HOLDERS BE LIABLE FOR ANYCLAIM, DAMAGES OR OTHER LIABILITY, WHETHER IN AN ACTION OF CONTRACT,TORT OR OTHERWISE, ARISING FROM, OUT OF OR IN CONNECTION WITH THESOFTWARE OR THE USE OR OTHER DEALINGS IN THE SOFTWARE.